Trophies and celebrations at the 2014 ATC Intra-Club Competition December 2, 2014 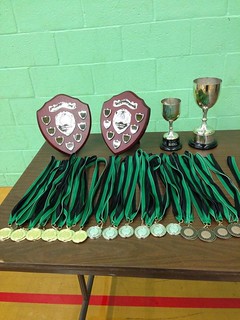 We ran our Intra-Club competition on Sunday November 30th, where both the recreational and Squad members of Alton Trampoline Club all had the opportunity to compete and show their routines. The event also saw the awarding of our annual trophies to celebrate the most improved and the best performing members of the year.

Many parents in attendance and staying for the whole afternoon to support every competitor and create a friendly and enjoyable atmosphere. They had the opportunity to watch competitors aged from 5 to 20 years old, and saw everything from less complex 5-skill routines up to the dazzling double somersaults performed by our National-level competitors.

The afternoon was complete with the awarding of our annual trophies to celebrate the accomplishments of our gymnasts over the last 12 months, which has included competitors who had qualified to represent the region at the Regional Championships, Dan achieving 3rd Place at the British Championships, and Katherine being one of the select few in the region invited to trials on the Performance Pathway scheme. 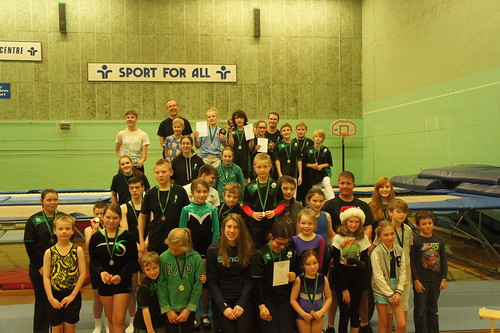 After rewarding the 2013 winners with keepsakes, the 2014 winners were announced. The highest form score of the day went to Marcus, who only competed in his first competition this year. The “Ian Barnes” award for highest form score of the year went to Lauren, who returned to trampolining having not competed for over 5 year. Marcus completed a successful day by winning the ‘Most Improved Splat’ accolade. Finally, the winner of the ‘Most Improved Squad Member’ went to Ethan for his excellent year.

Below is a short results video of the event.