Trampolining in Schools in the South continues to be popular, as we were pleased to host the Regional round of the 2015 BSGA Schools Competition, where over 350 young gymnasts jumped, somersaulted, and twisted, to try and earn a place into the next round.

While the introduction of an Intermediate category this year provided the opportunity for more medals being up for grabs, it was still only the top 3 individuals, and top 2 School teams, in each age group that were able to qualify for the Zonals round in January.

Alton Trampoline Club had 15 of its members enter the competition, representing 12 different schools and colleges, and enjoyed some tremendous success on the day, with 7 members qualifying through to the next stage! 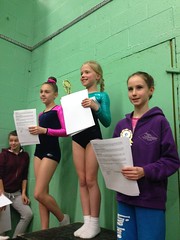 In the Junior School groups for Under 11s, Jasmine beat 39 other competitors win a trophy and claim 3rd place in the Novice group.

Brothers Alex and Robert both managed to achieve podium places in the Boys Disability Novice category to make for a very happy home on Sunday evening!

In the Elite categories, both Dan and Katherine performed difficult routines to win trophies in the Boys Disability and Girls Under 14 groups.

Emmeline was part of the Churchers Team who won 3rd place in the Intermediate Under 14s, following on from their success the previous year, thus narrowly missing out on qualification but coming away with heads held high. 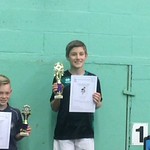 In the Under 14s Boys Novice, Scott produced two fantastic routines to the delight of his family to win the group and cap off a year that has seen him work so hard on improving his skills.

There were so many other positive performances as well as this, with special mention to Courtney, who achieved a personal success, coming 27th in the largest group of the day where she scored higher than nearly 100 other gymnasts in the Novice Under 14s!

It was a fantastic advert for the sport and shows the ever-growing popularity of Trampolining with School children. There were many successes and pleased children and coaches, and hopefully this will encourage more people to take up the sport.

We are incredibly proud of all of our gymnasts who competed in this and the South-East Schools competition, who all worked hard for the events.

Thank you to all of the judges and officials who gave up their day for the benefit of the young gymnasts, and to all of those parents and members of ATC who helped out on the day and in the set-up for the event. Finally, thank you to Janet Payne for the hours that must have been spent administering and co-ordinating entries from over 90 different schools!

Full results are available on our Downloads section or the link below:

Looking forward to seeing you all at the Zonals in January!