An exciting day of Trampolining saw over 200 gymnasts from across the Southern region descend upon Alton Sports Centre for the Regional Novice and Synchro competition on June 1st. 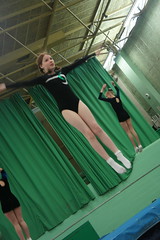 Designed to enable more inexperienced gymnasts to take part, Alton Trampoline Club had 24 nervous and excited competitors in the novice groups, many of whom were taking part in their 1st ever regional competition. Over a third of these fantastically managed to achieve podium places, with Lauren and Robert achieving 1st place in their groups! Many others also received medals for achieving a target score on the day as well. 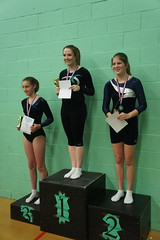 As well as the individual event, there was also a thrilling Synchronised Trampolining competition, which saw pairs of gymnasts compete simultaneously with their partners, performing the same acrobatic skills at precisely the same time. With 40 pairs entering, the competition was fierce and provided many highlights for the crowd. 3 pairs from ATC took part and saw the pairs of Hattie and Eloise, plus Stuart and Mike, narrowly miss out on trophies by coming 4th and 5th in their respective groups.

With much positive feedback from those involved, there are plans to return to Alton again for more Regional events. The day could not have run without the help of a huge number of volunteers, who did a fantastic job throughout the day, from running the Tombola, to setting up, and presenting the happy youngsters with their awards.

Thanks as well must also go out to the Region and everyone from all of those clubs who gave up their Sunday to bring along gymnasts along for the day, whether coaching, judging or spectating.

A rewarding and popular day of Trampolining – well done to everyone involved!

Our results video can be viewed below, and the full results from the day can be downloaded here:
(Novice & Synchro Results)