Alton Trampoline Club hosted and ran an Interclub competition for all ages and abilities on September 28th. It was a friendly event with other local clubs all invited to take part. With the Regional season finished, ATC and members from Swallows, Mistrels, Xcel, Alpha, and Farnborough Flyers all took up the opportunity for their new and experienced members to gain some further competition experience, with over 140 gymnasts taking part. 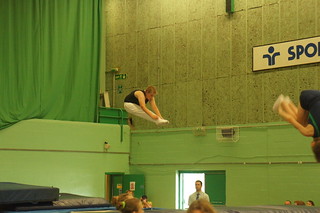 27 members from ATC took part, and it was great to see some of the older members who weren’t competing come along to support the younger members. With such a wide spectrum of ages and levels, there were certainly highs and lows, with plenty of trophies up for grabs. There were medals also available to members from all clubs which were awarded for personal achievement and were dependent on the Form Score of routines.

Huge thanks to all of the volunteers that helped the event to run, and it was great to see so many people there. From the feedback received, it was a successful day all around and fantastic to see the enthusiasm displayed and the popularity of trampolining in the region.

Full results, as well as our ATC results video can both be viewed below: