There was a fantastic turnout at our annual Intra-Club Championships, as more than half of our club members showed off their skills and were awarded with plenty of medals and trophies throughout the exciting event!

All levels and experiences were invited to take part, and the parents and spectators who supported us throughout the competition were treated to performances on both the Trampoline and DMT, culminating in a thrilling Synchro competition and a display from our GB Squad member and British Champion Stuart Sharpe.

For many of our members, it was their first experience of a competition, and they were greatly supported by our coaches and other more experienced members. We had everything from 5-move routines all the way up to 10-somersault routines, there was huge variety and it meant that all members, young and less-young, had a chance to take part.

Special mention to the Syncho competition at the end of the day, which saw teams such as Lorna & Scarlett and Hattie & Katherine, pulling out excellent high-level routines in nigh-on perfect synchronicity, coaches Scott & Eloise baffling the judges by completing complex skills you wouldn’t usually see within a routine, League-finalist Jonty & Level 1-Alex joining forces for the first time, a wonderful moment where brother and sister duo Frankie & Zach celebrated their routine having never tried Synchro with each other before, and eventual winners Stu & Kate Wiggens producing their National-level voluntary routine. 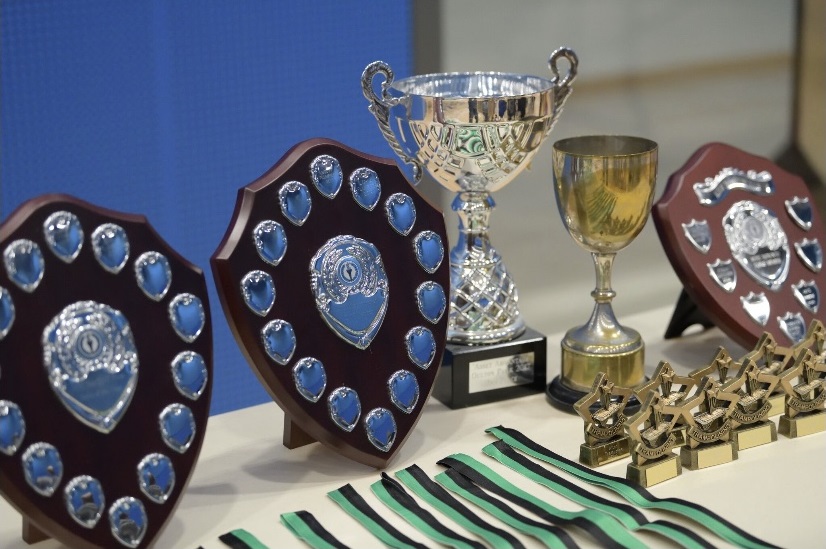 As well as the vast number of medals awarded for the competition, we awarded our annual awards for our Most Improved Members, as well as highest scores throughout the year and day. The winners were well-deserved and listed below. We also made a special presentation to two of our members for their outstanding contribution to the club over the year. Phoebe, one of our youngest members, raised over £200 by training and taking part in a 2k run, and Jonty, who after being unable to train for over 6 months following an injury (outside of club), continued to assist coach in training sessions and officiating and supporting members at competitions.

Finally, we would like to put out a huge thank you to everyone who helped and supported the club at the event. Many members donated prizes for our raffle, or made cakes to sell (including Vicky, Judy and Reuben) and this raised an amazing £150! To all coaches and officials who took the day to help the event run, and to our Competition Secretaries Anne and Federica, who did much of the organising for groups, timetables, and all of the various behind-the-scene work necessary for our competition to run so successfully.

Our Chairperson, Vicky, presented the awards and said what an amazing job we do for such a small club. We are hoping that this inspires our younger members to compete, and an opportunity for parents to meet our friendly Executive Committee. We are always welcoming, and if anyone is interested in helping join our committee and being part of our fantastic team then drop us a line, or come and speak to us to let us know.