The hard work and achievements by members of Alton Trampoline Club were recognised at the annual Alton & District Sports Council awards evening. 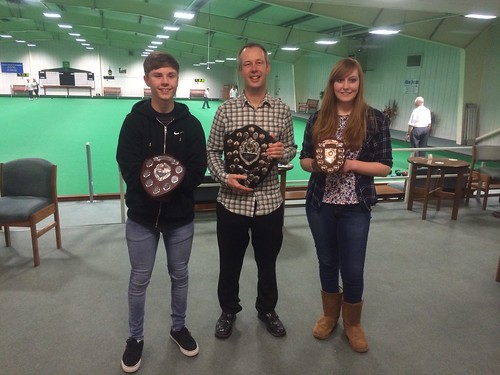 Over 70 people from across the district attended the event, representing a range of sports from all areas, such as Show Jumping, BMX, Football, and of course Trampolining. Those shortlisted for the awards all had their nominations presented, and it was a clear indication of the talent that exists within the Alton area.

Dan Johnson won Junior Disability Sportsman of the Year, following another successful year, which included Dan finishing 3rd at the British Championships, being selected for the GB Development Squad and being an ambassador for disability gymnastics.

Chloe Foster won Junior Volunteer of the Year for the time and effort she gives in helping the Club. She has given up whole days to help with competitions and donates many hours of her time to regularly assist with coaching sessions. Outside of Trampolining, Chloe has also been one of the select few chosen to represent the UK at the World Scouting Jamboree in Japan later in the year, as a reward for her commitment to helping others.

Andy Johnson won Senior Volunteer of the Year for the hours he has dedicated to developing the club. As well as Chairman, Andy is also a coach, and he is always approachable and willing to give his time for others. In typically humble fashion, Andy said that the award “is for everyone involved in the Club. There is no ‘I’ in ‘team’ and the club runs because of the volunteers who all work hard and they should all be recognised”.

A terrific achievement by the three of them and we are delighted that they have received this recognition.

Well done to all of the award nominees, and thank you to Brian Scowcroft and the Alton & District Sports Council for organising the event. You can visit their website for more information about them.